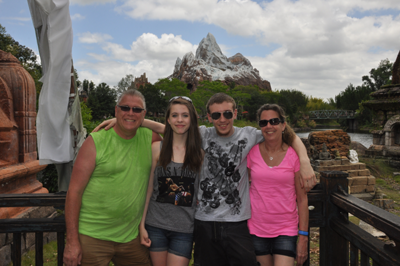 Diane Ordiway came to Metro Bolt & Fastener in February of 2012, bringing with her a freshness of spirit, consummate professionalism and an amiable demeanor that made her everyone’s favorite. Diane excelled as an accountant, fostered excellent customer relationships which allowed her to keep the Accounts Receivable at an enviable point. Diane also prepared the financial statements; working under stress frequently and always delivering a job well-done.

In early December of 2013 Diane was diagnosed with cancer. She has been undergoing various treatment modalities and has shown courage and faith in her struggle to have the best life possible. We have held Diane’s desk for her, hoping she would recover to the point where she would be able to come back – in any capacity – she is that valued as an employee and friend to Metro Bolt.

In 2013, Steve instituted an “Employee of the Year” award to be given by peer vote. Diane was the unanimous selection and in May 2014 she and her family enjoyed an all-expense-paid trip to Disney in Orlando Florida. Included in the trip was airfare, lodging at Disney’s “Old Key West” resort, park passes, meal plan, photography and spending money for Diane, her husband Mike, and their two children. Here at Metro Bolt we watched the week unfold through pictures and emails and it was obvious everyone enjoyed their trip immensely.

After serious consideration, Diane resigned her position on July 18, 2014. We were sad to see her take her family pictures down, but we believe she has made the best choice for herself and her family. We will always keep Diane’s spirit here at Metro Bolt and pray she enjoys years and years of medical retirement.