There was a time when most of the powerful tools we use today were crude and required great effort to get things done. Looking back in history at those tools we see they started with the challenge of solving some of their problems using materials that were available at that moment. When a task is to be accomplished, the people thought about how best it can be handled and how a device they thought could accomplish the task would be made. That was the beginning of the invention of most of the tools we use today. The invention has grown from one generation to the other. This is how modern tools evolved.

Long before the invention of modern tools, when the pyramid was built by the Egyptians, copper tools were used to quarry and cut the colossal blocks. It is believed that this was one of the first uses of a copper drill, sharpened by the many metalworkers in those days; the twine is rolled round and attached to a cross that was moved back and forth like a bow. One theory for the physical movement of the blocks to the site was that the laborers drilled holes through the blocks, placed either twine or a dowel through the block, and pulled the giant blocks up the way.

It was around the first century B.C., the first screw was brought into existence. They were made out of wood, had a corkscrew design and were used in various presses of the day, like wine and olive oil. The drivers of the times were basically anything that would twist the screw to get the desired result, eventually leading to a slot in the head of the screw and a coordinating driver with a tip that fit in the slot to ease the twisting process. Metal screws and nuts used for fastening and bound two items together weren't seen until the fifteenth century. 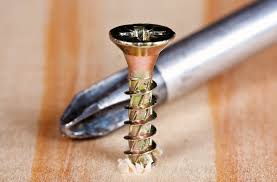 The man Henry Phillips developed the Phillips head screw as a need came for screws to take greater torque and grant tighter fastenings to coincide with the 1930's automobile assembly lines and their automated screwdrivers. Phillips' screw fit in nicely and created a new generation of screws and drivers in the process. Of course, it only took a few more decades to add power to the screwdriver, either as a single driving device or as an attachment for an electric drill.

It's been said several times that "necessity is what birth invention" and "with age comes wisdom". Combining both of these proverbs to come up with easier, simpler ways to do things more quickly and efficiently is what has changed these simple tools of the past into the higher-tech power tools of today, and will help to create the next generation of power tools for tomorrow. Buy today’s best tool’s and industrial supplies from Metro Bolt and Fastener. Visit our showroom in Michigan or buy online now!