Tools – Where Did They Come From? 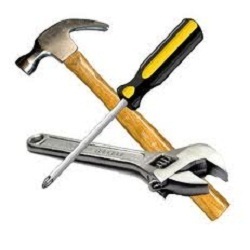 In the past our ancestors were not so fortunate because they had to deal with hand tools. There were no power tools for them! Hardware hand tools are used by craftsmen in manual operations, such as chopping, chiseling, sawing, filing, forging, and more. Dating the oldest tools is still much of an uncertainty. There have been tools found in northern Kenya in the late 1960s which date to approximately 2,600,000 years old, and even older tools are likely to be discovered. Tools are one of the more accurate items that can be dated to reflect the development of mankind.

Here are some popular tools and their dates of creation:

A. I. Jacobs invented the first three jaw drill chuck, Jacob's Chuck. The Jacobs® Chuck Manufacturing Company was founded in 1902 by the inventor.

Charles Brady King of Detroit invented the pneumatic hammer (a hammer which is driven by compressed air) in 1890, which he patented on January 28, 1894. Charles King exhibited two of his inventions at the 1893 Worlds Columbia Exposition; a pneumatic hammer for riveting and caulking and a steel brake beam for railroad road cars.

A hammer is a tool designed for pounding or delivering repeated blows. The hand held hammer is an ancient invention and the inventor of this tried and true tool is unknown. A “hammer” is distinguished by many other names, such as pounder, beetle, mallet, maul, pestle, sledge, and others.

The American Precision Museum is the home of the Machine Tool Hall of Fame. It is an incredible collection of pictures and biographies of some of the leading figures in the development of the machine tool industry.

The paint roller was invented by Norman Breakey of Toronto in 1940.

Simple pliers are an ancient invention - no one inventor can be named. Two sticks probably served as the first uncertain holders, but bronze bars may have replaced wooden tongs as early as 3000 BC.

Saws are tools with a thin metal strip with teeth on one edge or a thin metal disk with teeth on the periphery. In 1777, Samuel Miller invented the circular saw in England, the round metal disk type of saw that cuts by spinning and is used hand-held or table-mounted. Large circular saws are found in saw mills and are used to produce lumber. In 1813, Shaker-Sister, Tabitha Babbitt (1784-1854) invented the first circular saw used in a saw mill. Babbitt was working in the spinning house at the Harvard Shaker community in Massachusetts, when she decided to invent an improvement to the two-man pit saws that were being used for lumber production. Tabitha Babbitt is also credited with inventing an improved version of cut nails, a new method of making false teeth, and an improved spinning wheel head.

In 1807, William Newberry invented a band saw. In 1780, Gervinus also invented a circular saw, however, a more primitive one.

A wrench is also called a spanner, it's a tool, usually operated by hand, for tightening bolts and nuts. Solymon Merrick patented the first wrench in 1835.